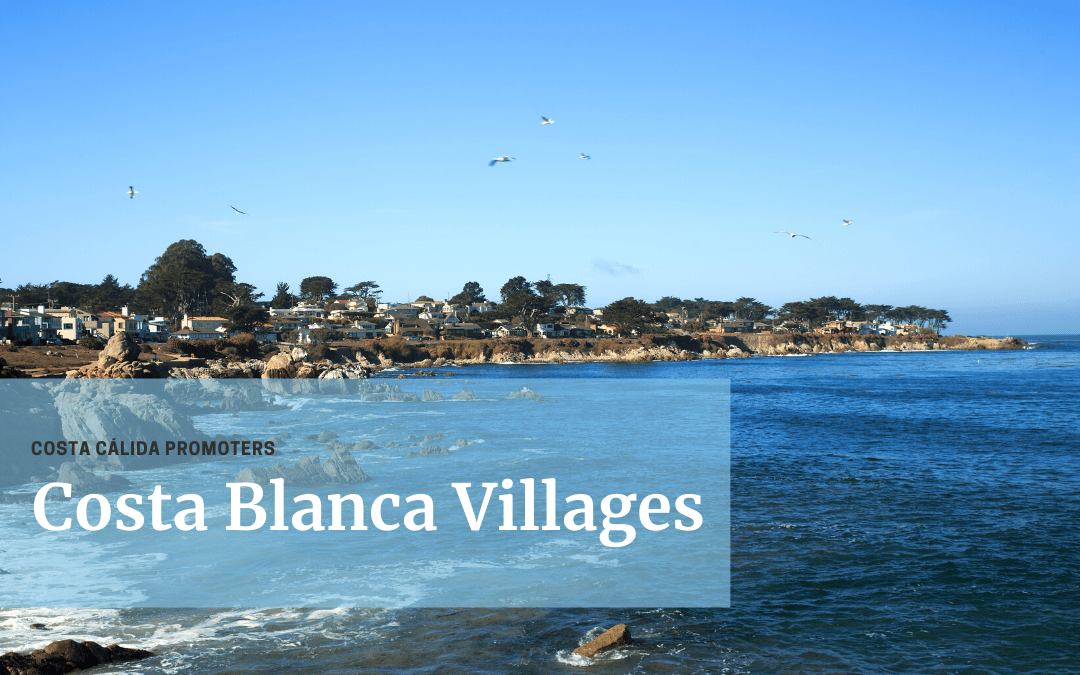 That is why Costa Cálida Promotores is going to review the most emblematic places to visit in the southeast of Spain. But first, a bit of context.

WHAT IS THE COSTA BLANCA

The Costa Blanca is the name given to the coastline in the province of Alicante in southeastern Spain, one of the regions with the best climate on the Iberian Peninsula. It stretches from Denia in the north to Pilar de la Horadada in the south. 244km of beaches, coves and cliffs.

And why is it called Costa Blanca? As we will see later, most of the villages in this area paint the facades of their buildings white. As the sun hits the houses, the villages glow, making the whole area look like a white coast from the air.

But the towns in this part of southeastern Spain are much more than white walls. They play with history, with the ancient and the modern, without forgetting the natural landscapes that range from the eternal beaches of fine sand to the most rugged corners of the mountains.

Places like the ones we are going to see below (although there are many more).

It is considered by many to be the most beautiful village on the Costa Blanca. Overlooking the sea and with a fishing tradition, Altea stands out for its whitewashed houses and cobbled streets that form postcards to stroll through. In the same day you can visit all the tourist attractions of this town: the promenade and the port, the old town, the Garden of the Senses, the Orthodox Church, the walled remains, the church of Nuestra Señora del Consuelo…

To visit Altea is to be surprised at every step, as this fishing village hides in its streets as much history as beauty. If you are on the Costa Blanca, you have to visit it. If you don’t, you will have wasted your trip.

Calpe is another of the most beautiful towns on the Costa Blanca. The best known image is the Peñón de Ifach, a 332-metre high mountain that has become a natural park thanks to its bio-diversity. But there are more things to see in Calpe, such as the salt flats, the Baños de la Reina, a Roman archaeological site on the seashore, the Roman Baths, the Torre Molí del Morelló, an Arab windmill, the 15th century walls of the old town and a thousand other secrets.

To go to Calpe is to be fascinated by nature, history and gastronomy.

Without leaving the coast, we travel to Denia, a city that dates back to Roman times. With so many years behind it, it is not difficult to guess that its streets and corners are full of stories from all eras, such as the Torrecremada Park, the Fish Market and Drassanes, the Fishermen’s Quarter, the Church of Nuestra Señora de la Asunción (located in an old air raid shelter from the Spanish Civil War)…

But, without a doubt, the place that stands out most in Denia is its castle, located on a hill that rises up from the heart of the town and built in the Islamic period. Its views and the stories it conceals make it a must-see for any tourist.

One of the most peculiar enclaves on the Costa Blanca. Located nine kilometres from the coast, this small village is the only inhabited island in the area. Remains from Roman times have been found on its land, and it was permanently inhabited in the 18th century. It has a medieval wall in perfect condition, cobbled streets, white-walled houses and beaches and coves with turquoise waters that more than invite you to swim, they force you to do so.

If you are on the Costa Blanca, you have to swim in Tabarca.

In rivalry with Altea for being the most beautiful town on the Costa Blanca, this town has existed since Roman times. Villajoyosa is famous for perhaps two main reasons: its Moors and Christians fiestas, where historic battles are reenacted on land and sea, and its gastronomy, which has gained international recognition thanks to its deep-rooted fishing tradition and the numerous gastronomic events that take place in its streets.

Another highlight of Villajoyosa is to be found in its hanging houses, buildings that defy gravity over the Amadorio river. But perhaps its most outstanding feature is the Fishermen’s Quarter, located next to the port and with the facades of the buildings painted in different colours. A visual note that makes the town a must-see.

Like almost all the towns on the Costa Blanca, Jávea has a cobbled old town centre and white-walled houses that will delight any tourist, not forgetting its Playa del Arenal and its extensive marina. But the most famous element of this town is not in the streets, but in the surroundings.

Jávea has some of the most stunning natural spots on the Costa Blanca. Places such as the Granadella cove or the Montgó Natural Park, which includes places such as the lighthouse of San Antonio cape, the Cova Tallada, the Molins de la Plana or the sea caves that can be visited from the sea.

Somewhat lesser known internationally, this beautiful village has retained all its medieval essence. Perched on a rise in an inland valley in the province of Alicante, this historic gem boasts a castle that seems to rise out of the mountain, streets and houses perched on steep cliffs, and views that stretch for miles around.

If you want to feel history in its purest essence, you have to visit Guadalest.

As you can see, the Costa Blanca is home to places that are striking for their beauty and history. But the Costa Blanca is much more than towns and cities, as we will see in future articles. So be sure to visit our blog to discover a thousand more secrets.

Do you need more reasons to come and live in this piece of paradise? You have them in our homes! In Costa Cálida Promotores we understand and respect the environment, building houses that fit perfectly with the history and beauty of the Costa Blanca. You can visit them on our website.

If you have any questions, please contact us through the means indicated on this page. We will be delighted to help you.